Bridget learns to see at Crosswalk

what she saw changed her—and the direction of her life 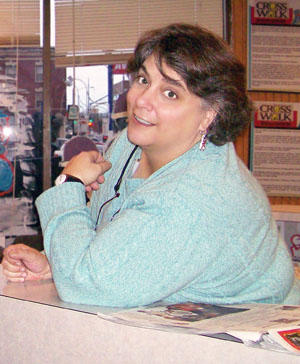 It’s 1994 and I’m reading the paper. I had just moved to Spokane—left my 7 siblings and my parents in New Jersey and come out here for a less stressful job cooking at Clinkerdagger's. I’m looking through the want ads to find someplace where I can make a difference as a volunteer.

I’d never heard of Crosswalk, but as I looked through the columns the “teen” thing jumped out at me. I remember thinking, “awesome, teens have attitude. I like that.” Even though it was something I didn't know much about it sounded like a place where I could make a difference.

Before I knew it I was alone with a couple other adults and all these kids with smelly clothes, pierced everything and whakadoodle haircuts. Some of them were very clear about not needing me or my help. I didn’t know why they pushed me away like that or why they talked or acted or looked the way they did.

But then, about a month and a half after I’d started volunteering there, something happened that changed everything. It was that time between Thanksgiving and Christmas when everyone is happy and families are all Kumbaya and it was about six in the evening when this tall, preppy blonde-haired girl walks in with her head down. She didn't look like the rest of the kids at the shelter—all angry and dark and mohawked—she was the kind of girl you grew up next door to, you know?

She was pretty upset, but after a few minutes we pieced together her story. She was from California and her mom had kicked her out—because she had been cut from her high school basketball team. Mom had sent her to Spokane to live with her dad. The only problem was that mom didn’t even bother to call dad and dad doesn’t want her. So, it’s just before Christmas and he dumps her in front of a shelter in a city where she knows no one.

It wasn’t that her situation was worse than the others—in fact, it’s nothing compared to some of the things I’ve seen. But as I watched her cling to the staff (she wouldn’t even go near the other kids or talk to anyone) I saw how afraid she was. Because she didn’t have the heavy eyeliner or the baggy clothes to hide behind, because she hadn’t learned the tough exterior or figured out how to protect herself by scaring everyone around her—because of that I could see her.

The Crosswalk staff was able to advocate for this girl. They gave her a voice by talking with mom and helping to work things out. When things were stable, Crosswalk bought her a bus ticket and sent her back home. But even after this girl was tucked back safely in her California bed, I never forgot what I saw.

That’s when I really started seeing past the crazy hair and the dirty fingernails. I started seeing the kids for what they were beneath all that—terrified children, alone and scared to death—all of them. When I saw that it changed me. I realized that what I was really doing wasn’t just playing pool and board games—I was spending time with these scared little kids not because I had to, but because I wanted to. Little by little I could see in their eyes and hear in their voices that it mattered to them whether or not I was there. Because whether or not they realized it we had a relationship and that makes a difference.

It made such a difference to me that after four years of volunteering I became an employee and now I've been hanging out at Crosswalk a couple decades. If I've learned anything in those years, it’s that when one of these frightened kids can see that someone cares about them—even a little—it gives them permission to care about themselves. That’s when things really change for them.